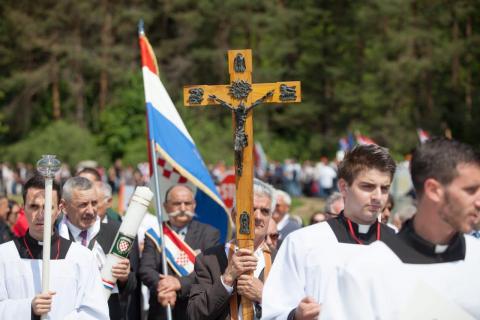 A controversial annual mass gathering of Croats at Loibacher Feld near the Austrian town of Bleiburg, which has been accused of nurturing nationalist sentiments, is not expected to take place this weekend, Austrian police said on Thursday, after the event was also cancelled in 2020 because of the coronavirus pandemic.

"No gathering has been reported for the weekend, not even from the Honorary Bleiburg Platoon, which has organised this gathering so far," Croatian media quoted the police spokesperson for the Austrian region of Carinthia, Reiner Dionisio, as telling Austrian news agency APA.

Dionisio said that despite this, police will be "present on the spot" on Saturday just in case. He also pointed out that anyone who comes from Croatia to Austria should go into quarantine under measures to prevent the spread of the coronavirus.

A protest by local opponents of the annual gathering is expected to be held on Saturday in the centre of Bleiburg, he added.

The annual Bleiburg gathering commemorates tens of thousands of Croatian Nazi-allied Ustasa troops and civilians who were killed by the Yugoslav Partisans in 1945.

But it has become controversial because some participants display symbols of Croatia's Nazi-allied Ustasa movement, which killed Jews, Serbs, Roma people and others during WWII in the Independent State of Croatia. This led Austria to ban the display of certain Ustasa symbols.

Lawmakers in the Austrian National Council, the lower house of the country's parliament, called last year for a ban on the Bleiburg gathering, saying that it promotes the glorification of the Ustasa regime.

Earlier this week, organisers of the annual event, the Honorary Bleiburg Platoon, said that the anniversary will be commemorated on...