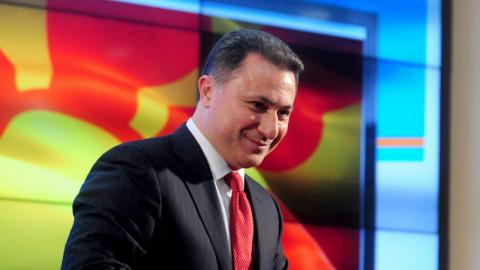 North Macedonia's Organised Crime Prosecution on Wednesday filed charges against the country's fugitive former prime minister, Nikola Gruevski, and some of his former close associates, in a high-profile case linked to the illicit purchase of building sites.

The prosecution has called for the seizure of the real estate in question, which has an estimated total value of 1.5 million euros.

Gruevski is the first accused in a case concerning six persons. He is charged with money laundering and illegal acquisition of property, as well as concealing that he was its true owner.

According to the charges, Gruevski used money drawn from donations made to the then ruling VMRO DPMNE party, which he then led, to purchase the properties, using an offshore company registered in Belize.

Gruevski allegedly obtained some 1.3 million euros between 2006 and 2012 which he used to buy the attractive sites.

The prosecution claims that after Gruevski learned in mid-2012 that a 11,000-square-metre plot was on sale in Vodno, he asked his cousin, Mijalkov, to help him buy it, and also hide that he was the real owner. Mijalkov, then head of the secret police, then included Nenad Josifovic in the scheme.

UN Human Rights Committee to Review Bulgaria and Other Countries

An Earthquake of 7.6 on the Richter Scale Hit Central America