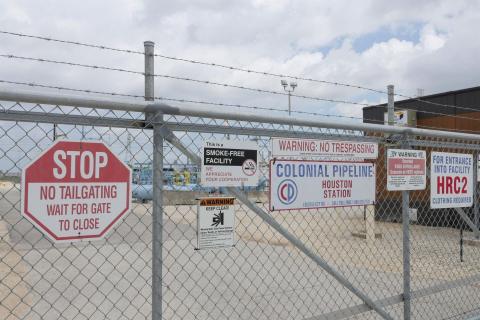 The major U.S. pipeline network forced offline by a cyber attack began to reopen on May 12, its operator said, after a five-day shutdown prompted motorists to frantically stock up on gasoline and some gas stations on the U.S. east coast to close.

But Colonial Pipeline warned that it will take "several days" before supplies return to normal.

Faced with a growing shortage, late on May 12 the White House announced that it had waived the Jones Act - which blocks the use of non-U.S.-flagged vessels, which are cheaper and more plentiful, to transport fuel.

It will be "temporary and targeted" to the company, Biden administration spokeswoman Jen Psaki said in a statement.

"This waiver will enable the transport of additional gas and jet fuel between the Gulf Coast and East Coast ports to ease supply constraints," she said.

Psaki added the White House would continue to monitor the situation, and urged Americans to "just purchase what they need, and not hoard fuel, as supply is restored".

The move came after a dozen states - from Florida to Virginia - declared a state of emergency, heightening the sense of panic among consumers who flocked to gas stations bearing fuel cans and other containers to fill up.

A ransomware attack Friday on Colonial Pipeline forced the company to shut down its entire network, hampering supply in eastern states.

But the company said late Wednesday it had "initiated the restart of pipeline operations today at approximately 5 p.m. ET" (2100 GMT).

"Following this restart, it will take several days for the product delivery supply chain to return to normal," the statement said, adding that some of its markets would continue to experience service interruptions.