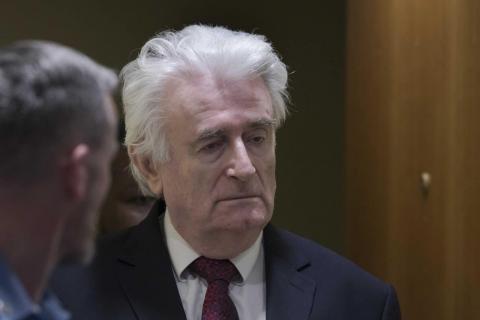 Former Bosnian Serb president Radovan Karadzic's defence has submitted a challenge to the decision on Tuesday by the UN court in The Hague to transfer him to a prison in Britain to serve his life sentence for genocide and other wartime crimes, claiming he could become the target for a potentially deadly attack by other prisoners.

A defence submission to the Mechanism for International Criminal Tribunals argued that Karadzic, 75, "would be in danger from Muslim extremists".

It cited an attack at Wakefield jail in Britain in 2010 on Bosnian Serb Army general Radislav Krstic, whose face and neck were slashed by three Muslim prisoners in his cell. Krstic, who like Karadzic was convicted of the genocide of Bosniaks from Srebrenica, was transferred back to the Netherlands and then to a Polish jail.

"Sending President Karadzic to the United Kingdom under these circumstances is tantamount to a death sentence," they said.

If he was killed, this would create "martyrdom for President Karadzic" that would undermine the UN war crimes tribunal's legacy, they insisted.

Karadzic's lawyers claimed that in order to mitigate the danger to the wartime Bosnian Serb leader, he would have to be kept "conditions tantamount to solitary confinement".

They cited the case of former Liberian President Charles Taylor, saying that after being transferred to Britain to serve a sentence for war crimes, Taylor was segregated from the rest of the prison population because the authorities believed he was a target for attack.

Stolen İznik tiles of mosque found in Netherlands
Florin Raducioiu : It is painful that Romania has missed EURO 2020

Oldest painting of Alevi dervish up for auction