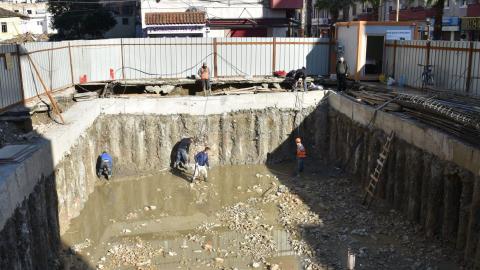 The city of Durres dates to the 6th century BC. In 2004, not far from the construction site on Dyrrah Boulevard, archaeologists discovered a sculpture of Gaea, goddess of the Earth in Greek mythology. Experts fear the now-destroyed archaeological site on Dyrrah Boulevard may have been a religious object or an important public building, possibly even an imperial palace from the 6th Century AD.

While Albanian law requires that construction in such archeologically rich areas be monitored by professional archaeologists, BIRN has discovered that in this case no such monitoring was carried out. And it's not the only one in a town that bore the brunt of the 6.4-magnitude quake in 2019.

Workers use a jackhammer to tear down an ancient wall at the site of a government-sponsored development. Photo: Geri Emiri

The 2019 quake killed 51 people and left hundreds of families homeless. But it was not the first to strike Durres, which in its long history has been repeatedly destroyed by earthquakes and rebuilt over the ruins. Beneath the current city sit the remains and riches of ancient Greek, Roman and Ottoman-era buildings.

The law requires that redevelopment work be monitored by Albania's Institute of Archaeology or by private, licenced archaeologists.

The apartment block at No 14, Dyrrah Boulevard, was built in the 1980s as communal housing but was classified as uninhabitable following the 2019 earthquake and torn down.

In June last year, the Institute of Archaeology wrote to the Ministry of Culture and the Municipality of Durres to highlight the...