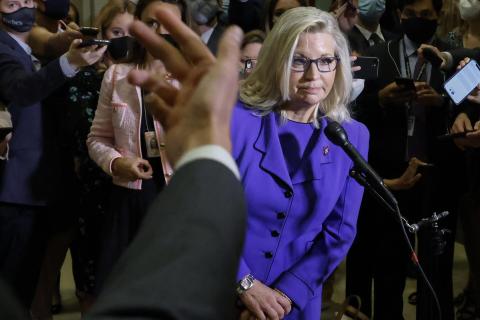 U.S. House Republicans on May 12 ousted conservative Liz Cheney, a fierce critic of Donald Trump, from her powerful leadership role in a move that tightens the former president's grip on the party.

Eighteen months before crucial midterms and three years before the next presidential race, the Republican Party punished one of its own for her refusal to embrace Trump's false claim that Democrats stole the 2020 election.

Cheney, daughter of former vice president Dick Cheney, remains a member of Congress. But a swift, closed-door voice vote to remove her as the number three House Republican offered her up as the latest political sacrifice in the GOP's alignment with Trump.

The Wyoming lawmaker told reporters afterwards she would continue fighting for conservative principles and against the embrace of a one-term leader who keeps spreading voter fraud falsehoods.

"We cannot be dragged backwards by the very dangerous lies of the former president," Cheney said.

"We must go forward based on truth. We cannot both embrace the big lie and embrace the Constitution."

The 54-year-old also stood firm against the prospect of Trump running again in 2024.

"I will do everything I can to ensure that the former president never again gets anywhere near the Oval Office," she said.

Trump punched back in a typically abrasive, personal attack.

"Liz Cheney is a bitter, horrible human being," he said in a statement after her ouster.

"She has no personality or anything good having to do with politics or our Country."