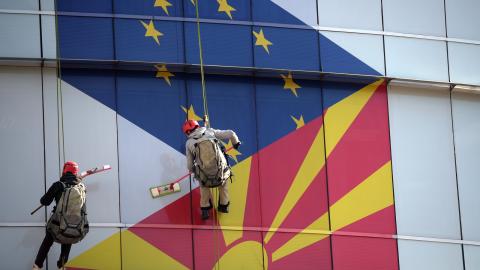 While EU Foreign Policy Chief Josep Borrell "practically corrected Varhelyi," said Malinka Ristovska of the European Policy Institute, EPI, a Skopje-based think tank, he offered nothing new on how the bloc proposed to get around Bulgaria's continuing veto threat.

"There is nothing new here and it is not particularly encouraging because it is known that the space for a settlement between [North] Macedonia and Bulgaria is very small," Ristovska said. Meanwhile, serious damage is being done.

"Citizens of Macedonia, for example, may start losing confidence and hope in the EU as a credible partner for the future even more," Ristovska said. "The same goes for the rest of the Western Balkans."

'We will lose the Western Balkans'

After several years of treading water, the EU is trying to advance Albania and North Macedonia jointly towards accession, having revised its enlargement strategy to overcome opposition from France and the Netherlands to any imminent expansion to the Western Balkans.

In 2018, then Macedonia agreed to change its name to 'North' Macedonia in exchange for Greece dropping its veto on its northern neighbour's EU and NATO integration, but now Bulgaria says Skopje must first accept what Sofia says is the Bulgarian origin of the Macedonian language and identity.

Amid deep political uncertainty in Bulgaria following an inconclusive April election, Sofia looks unlikely to back down before June, when the EU has pencilled in the official start of talks.

With this in mind, Varhelyi told Euronews on Thursday: "If we run into...