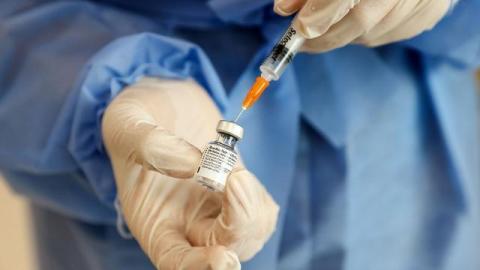 Turkey is expanding the scope of its vaccination program against COVID-19 by starting to inoculate spouses of health care professionals, Health Minister Fahrettin Koca has announced.

"We are moving to a new phase in the vaccination program. Spouses of health care workers will be able to make an appointment for the virus jab starting May 13," Koca wrote on Twitter on May 12.

He once again thanked health care professionals "for their sacrifice and struggle."

Turkey rolled out its vaccination program on Jan. 14. To date, it has administered nearly 25.4 million doses of COVID-19 injections.

The country has been using the vaccines developed by Pfizer/BioNTech, and the Chinese firm Sinovac in its inoculation drive.

Earlier this week, Sinovac announced that it provided a license to Turkey to produce the vaccine.

Meanwhile, Turkey received another batch of Sinovac's vaccine on May 12. They will be in use after tests are run on the jab.

The country has signed an agreement with the Chinese firm for procuring 100 million doses of vaccine.