Vučić: We have great news that arrived late last night 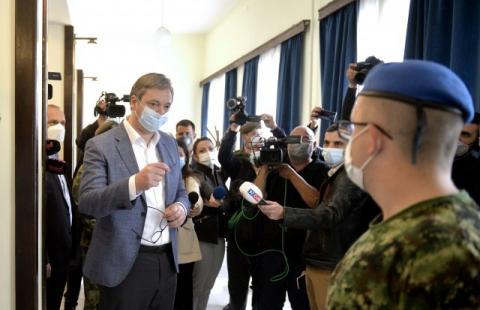 He added that this is the latest assessment of the IMF, which, he says, is "incredible for Serbia". While visiting the vaccination point for members of the Belgrade garrison, Vui said that the news came late last night. However, at first he was not sure if we could announce it.
"I checked with my associates whether I can publish that information," president told members of the press.

As he later revealed, the IMF changed the growth estimates for our country. According to new projections, economic growth is 6 percent this year, and 4.5 percent in 2022 (it was originally announced that it would be 3.8 percent), while the deficit rate has been reduced.
"They changed to 6 percent. I am extremely proud of the latest forecast, which I received last night around 10 or 10.30 pm, that the IMF changed its projections for Serbia. Earlier they said that the growth would be 5 percent. The European Commission also changed the forecast and said that it will be 5.3 percent, and now the IMF has changed it to 6 percent", Vucic said in the "Dedinje" barracks, where a vaccination point for members of the Belgrade garrison and members of their families has been opened. Vui pointed out that the IMF came to what Serbia was saying, that the growth of our country's GDP will amount to six percent this year. "I kept saying that we could ever reach seven percent," Vucic said.
He says that Serbia had a minus of 0.9 percent in 2020, which is why we were the best in Europe, along with Lithuania.

Public debt will start to fall

Also, the IMF says that this year, Serbia, despite the huge investment in the army and investment works, will not have a public debt higher than 60.3 percent.
"It is important that the IMF...