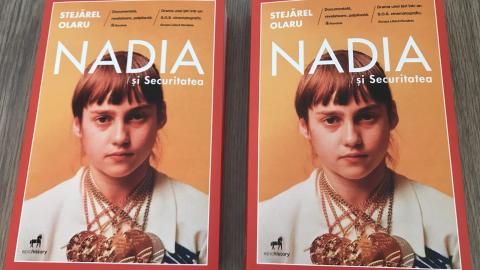 During the remainder of the Games, where she won three gold medals, she would receive the highest possible score six more times, becoming one of the most iconic sporting legends of all time - as well as a silver bullet for the Romanian regime in terms of international propaganda.

But fame came at a price. Thirty-five years on from her unprecedented feat in Canada, a new book reveals with chilling detail the extent of the round-the-clock surveillance Comaneci endured at the hands of the Securitate secret police, as well as the physical and psychological abuse inflicted on her by her draconian coach, the renowned gymnastics trainer, Bela Karolyi.

Nadia and the Securitate, by Romanian historian Stejarel Olaru, is a meticulous and ballyhoo-free reconstruction of the ordeal the teenager experienced at home while awards and accolades poured in from abroad - to be cashed in by Romania's dictator, Nicolae Ceaucescu.

The book draws mainly on the now declassified archives of the secret police, the infamous Securitate.

"She started being surveilled when she was only 13, until 1989, when she fled the country," explains Olaru, who had extensively researched the Securitate archives before, but confesses feeling shocked at the magnitude of the human, technical and logistical resources mobilized by the Ceausescu regime to control Comaneci.

Since she started excelling in sport in her hometown until the very moment she managed to evade her watchers and illegally cross the border into Hungary on foot, and then seek refuge in the US, virtually all her movements and many of her private conversations were monitored and documented.

Nadia Comaneci is picturet while walking with three adults in a 1978 photograph taken by one of her...