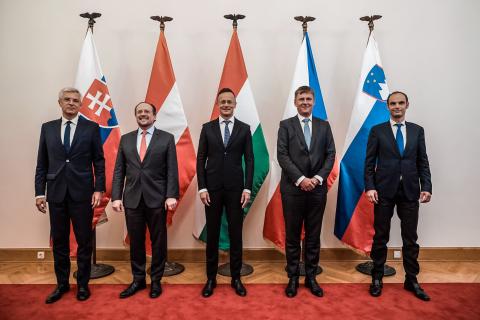 Bratislava – The foreign ministers of the Central 5, including Slovenia’s Anže Logar, discussed on Thursday possible relaxation of Covid-19 border restrictions during the summer season. They agreed that coordinating and informing each other about measures was necessary so that movement of people and business is not excessively restricted.

The ministers from Austria, the Czech Republic, Hungary, Slovakia and Slovenia discussed possibilities to conclude bilateral or regional agreements for crossing of borders and endorsed a European digital green certificate that would make this easier, the Slovenian Foreign Ministry said after the meeting in Bratislava.

Austria’s Alexander Schallenberg assessed that it was very important that life got back to normal as much as possible even before the summer, which was possible with the certificate and with vaccination, reported the Austrian press agency APA.

Slovak Foreign Minister Ivan Korčok, who hosted the meeting, agreed that mobility was a must, and said that “today we are again close to opening up and we hope that this time it will be for good.”

The foreign ministers of the informal group of five Central European countries agreed that until a digital green certificate is fully implemented in the EU, regional and bilateral agreements on recognition of vaccination certificates would be needed.

Slovenia’s Logar also presented the priorities of the upcoming Slovenian presidency of the EU Council, including improving the resilience of the EU to crises, and development of trans-Atlantic relations and the situation in the Western Balkans.

He announced a visit by three foreign ministers of the initiative to the capitals of Albania and Noth Macedonia at the end of May as an expression of support for the EU accession prospects of the region, the Slovenian ministry added.

The ministers also talked about the EU-Russia relations and called for consistent implementation of the existing five guiding principles.