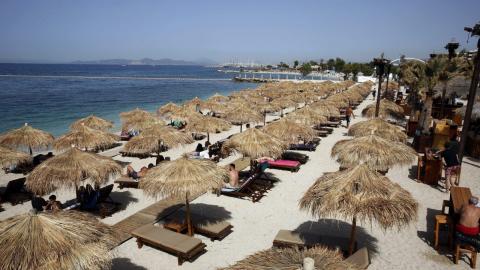 Greece officially reopened for international tourism on May 14 with a campaign targeting foreign visitors, titled "All you want is Greece", presented by Tourism Minister Harry Theocharis in front of the backdrop of the Temple of Poseidon on Cape Sounio one day before.

The campaign is the biggest promotional programme that the Greek National Tourism Organization, GNTO, has organised in a decade, and features five videos, as well as a website (visitgreece.com) which will be launched in the coming days.

Having returned from foreign tours promoting Greece as a safe tourist destination for the summer, Theocharis said all visitors to the country would need to present a certificate of vaccination against COVID-19, a recent negative PCR test, or a document certifying recent recovery from the virus. Tourists will also need to have prepared a form stating where they will be staying in Greece, and for how long.

Although the videos focus on the promotion of the country's natural landscapes, the minister said this year's real challenge was not promoting Greece's natural beauty but "safety" in the context of COVID-19 and health.

He insisted the Greek government had taken all necessary measures in that respect, and talked of last year's summer as a good example, when he said: "Greek tourism won a difficult bet. We opened with strict conditions and welcomed visitors safely to the country."

In reality, the efficiency and success of last year's summer season, as well as this year's prospects, are widely questioned both in and outside the country.

In a recent interview the minister gave to BBC radio's HardTalk show, Theocharis faced tough questions about the country reopening to tourists while numbers of vaccinations remain fairly low; so...