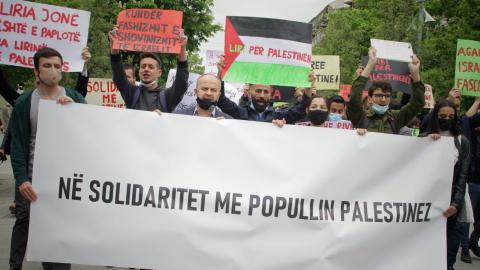 "Israeli fascism and chauvinism are continuing ethnic cleansing," the marchers told the media, adding that due to the "attacks and violence used by the Israeli authorities this week alone, a total of 24 Palestinians were killed, including nine children, leaving hundreds injured".

Announcing the march on Facebook, the Feminist Thinking and Action Collective, the group of feminist activists who organised the march, said that "systematic [Israeli] violence is escalating into evictions and usurpation of Palestinian homes in Jerusalem" and is "a violation of the fundamental rights and freedoms of peoples everywhere, and must therefore be universally opposed by all of us".

The marchers gathered at midday at Zahir Pajaziti Square in Pristina and walked to Skanderbeg square shouting slogans such as: "Freedom for Palestine", "Do not touch children", "Do not kill women", "Against fascism" and "Against ethnic cleansing".

As the marchers shouted slogans supporting Palestinians in Gaza, some hostile passersby called them names or voiced disagreement.

While many Kosovo citizens compare Israel's treatment of Gaza and Palestine to Serbia's harsh rule over, and aggression to Kosovo in the 1990s, some say Palestine does not deserve their support, as the Palestinian Authority does not recognise Kosovo, while Israel does.

According to the BBC, some 119 Palestinians and eight Israelis have been killed since the violence started this Monday, when Hamas began firing rockets into Israel in retaliation to a dispute in Jerusalem between Israeli police and local...