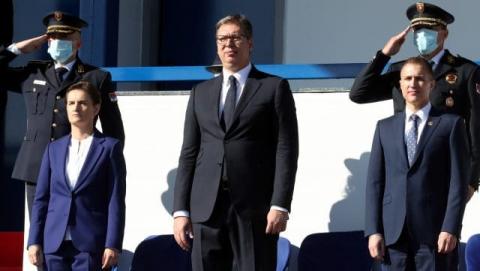 As meetings of city and municipal committees of the ruling Serbian Progressive Party, SNS, begin throughout Serbia, some SNS boards have voted to dismiss Defence Minister Nebojsa Stefanovic, until recently one of the closest allies of Serbia's President Aleksandar Vucic.

Ozonpress, another local media, from Cacak, western Serbia, reported that the local SNS Board unanimously recommended the removal of Stefanovic from all party functions - and his expulsion from the party.

That his situation is serious is shown by the official statement of Vladimir Djukanovic, a member of the SNS presidency, who demanded the resignation of Stefanovic and the whole SNS board in the capital.

The rifts in the SNS are not a complete surprise, despite the party's strict discipline. Pro-government tabloids have for months published stories about Stefanovic's involvement in numerous dubious affairs.

One of the founders of the SNS, he is a member of the party presidency and is president of the party's Belgrade City Board. As well as Minister of Defence he is Deputy Prime Minister.

Stefanovic was Interior Minister from 2014 until 2020. Serbian tabloids have accused him of wiretapping Vucic and plotting against him, but also of crimes ties with the "Belivuk" group, a recently arrested drug-trafficking gang with known ties to the SNS and government officials.