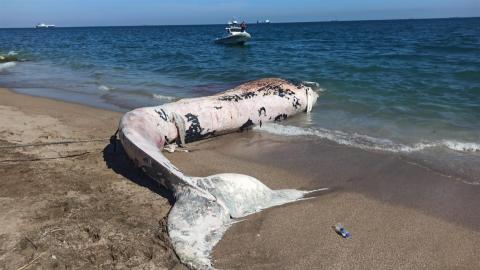 A 14-meter-long fin whale, which has washed up on the shore of the southern province of Mersin, was moved on to the shore after a four-hour operation on May 13.

The dead body of the whale was transferred to Mersin University. Its skeleton will be exhibited in the city's Sea Museum.

Early on May 13, some inhabitants informed the police that "something big" was floating on the sea some 200 meters off the shore.

As the Coast Guard spotted that it was a dead whale, a team of firefighters was also transferred to the seaside.

Pulling the whale to the shore with a boat, it took some four hours to load the whale to a crane as the ropes of the crane were torn apart twice due to the animal's weight.

After meticulous work, the whale was delivered to the local officials of the Yenişehir district.

"We will conduct an autopsy and then display its skeleton at the museum," Deniz Ayas, an academic from Mersin University, told Anadolu Agency.

Saying that the fin whales are the world's second largest whales after the blue whales, Ayas noted that the dead animal was a "young one."

"This species is rarely seen in the eastern Mediterranean. You can mostly see them off the shores of France and Spain in the western side of the Mediterranean," he stressed.

When asked about the reason behind the animal's death, Ayas said, "We cannot say anything definite before seeing the autopsy report but the plastic pollution in the seas is a major problem for sea creatures."

Slovenia’s Zidanšek makes it to semi-finals of French Open

How to Prepare for Vacation in Bulgaria?