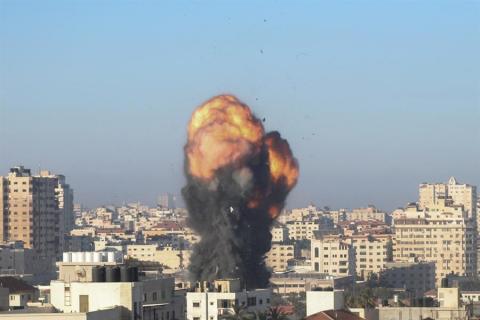 A family of 10 were killed early on May 15 in an Israeli air strike on the western Gaza Strip, medics in the Palestinian enclave said.

Eight children and two women, all belonging to the Abu Hatab family, were killed in the three-storey building in Shati refugee camp that collapsed following an Israeli strike, medical sources said.

Israeli attacks on the blockaded Gaza Strip has taken the death toll to 144, according to Gaza's Health Ministry.

Meanwhile, Hamas' military wing, the Izzeddin al-Qassam Brigades, announced that Ashdod, Beersheba, was hit by rockets in response to an attack on a house in the Al-Shati refugee camp and to avenge Palestinians killed in the occupied West Bank.

Three Palestinians, including two siblings, were killed in late-night attacks by Israeli war jets on the Tel Kuleybu area in northern Gaza.

Total fatalities in Gaza includes 37 children and 22 women, while the number injured exceeds 950 since Monday, said a statement from the ministry.

The Kuleybu Mosque was completely destroyed in an attack, Gaza's Ministry of Foundations and Religious Affairs said in a statement.

Before that attack, Israel killed seven civilians, including five children and two women.

Witnesses said the bodies were taken to Shifa hospital after the bombing of a house belonging to the Abu Hatab family in the Al-Shati refugee camp.

A search for missing people under the rubble is underway, they said. Israeli warplanes resumed airstrikes Friday on the blockaded Gaza Strip, causing heavy damage to residential buildings across the enclave.