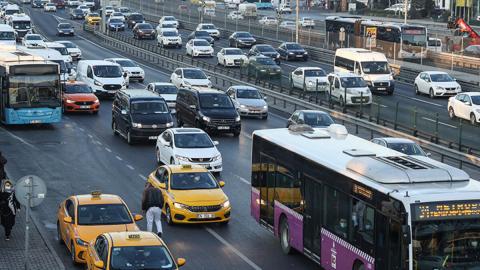 In an effort to improve the traffic problem and lower the accident rate in Turkey's most populated province of Istanbul, the traffic division of the provincial security directorate conducted research and found 10 blind spots where the rate of accidents is considerably higher.

Indicating the 10 spots where the risk of deadly accidents is higher in Istanbul, the traffic division marked the two sides of the Golden Horn Bridge at the top of the list, with 33 deadly incidents that occurred last year.

The Cevizlibağ region on the D-100 highway was marked second on the list, with 31 deadly accidents, followed by the Zeytinburnu Metrobus station on the same highway, with 20 inci-dents.

The Boulevard of Barbaros in the Beşiktaş district made to the bottom of the list with 10 deadly accidents.

The police officers also highlighted that they made regular checks on roads to the three bridges of the provinces.

Asking drivers to obey traffic rules, police officers highlighted that not only do people lose their lives or become severely injured because of accidents, but they also cause a huge impact on the country's economy.