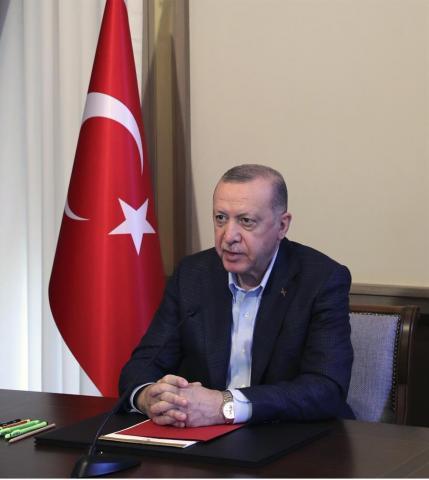 Calling on the world to stand against Israeli attacks on Palestine, President Recep Tayyip Erdoğan said on May 14 that Turkey will not accept Israeli persecution, even if the whole world ignores it.
"Those who share Israel's bloodshed by choosing to remain silent or backing it for political reasons and ideological leanings should know one day it will be their turn," Erdoğan said while addressing a virtual meeting of the ruling AKP.
"It is imperative that the U.N. Security Council takes steps to ensure peace in Jerusalem in line with decisions of the General Assembly," he said.
On Israeli attacks, Erdoğan said Turkey is ready to actively support any initiative by the U.N., and take responsibility for peace.
If the Organization of Islamic Cooperation does not take a "concrete" stance against Israeli attacks, it will discredit its own existence, the Turkish president added.
"If we do not immediately stop Israel's aggression in Palestine, and especially in Jerusalem, tomorrow everyone will find themselves the target of this brutal mentality," Erdoğan noted.

He went on to say that "this terrorist state," which tries to plunder a city like Jerusalem, which houses the holy places of Muslims, Christians, and Jews, "has crossed all limits."
"Resisting (Israel's) aggression on Palestinian cities and Jerusalem is a debt of honor of all humanity," Erdoğan added.
The Muslim bloc has called an emergency ministerial meeting on Sunday to discuss Israeli attacks on Palestinian territories.
Tensions have been running high in the Sheikh Jarrah neighborhood in occupied East Jerusalem over the past month as Israeli settlers swarmed in following a court order for the eviction of Palestinian families in the area.
Most recently, tensions further...