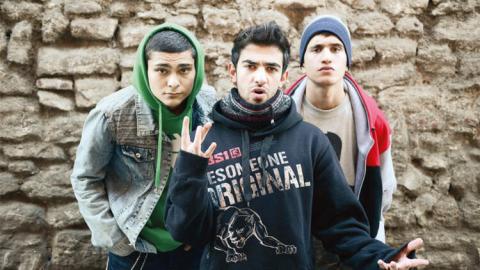 An academic study conducted at Boğaziçi University on the popularity of Turkish rap music has found that there are different themes and listening habits in two separate working class areas in Istanbul, the district of Bağcılar and the Sulukule neighborhood of the Fatih district.

The rap artists in Sulukule are politically critical and stern, while the youth in Bağcılar are eager to rise to fame quickly, according a postgraduate thesis by Umut Mişe, a research associate in the prominent Turkish university

"The urban transformation in Sulukule has made the region's rap music more critical. The neighborhood youth is living a cultural activism, so the lyrics in their rap has a critical tone," said Mişe.

But the situation in Bağcılar's rap production and consumption is the complete opposite. The singers in Bağcılar see rap as a way out of their socioeconomic hardships.

Bağcılar rappers want to rise to fame as soon as possible. Saying that these young people have only one target, Mişe noted, "They want to record a song, upload it on social media, be famous quickly and then move out of Bağcılar."

Hataylı Bela, which means "Trouble from [the southern province of] Hatay" is the most famous rap band in Bağcılar. In Sulukule, it is Tahribad-İsyan (Rebellion for Destruction).

Having spent six months in Bağcılar and Sulukule for his thesis, Mişe stressed three problems which the two regions have in common.

"Poverty, lack of education and the use of drugs are common problems of both places. Nearly all of the people between the ages of 16 and 25 have not finished school."

Sulukule is known as the one of the oldest Roma settlements in the world. Romani people came to the neighborhood in 1054 from India. The hub of...

Many countries forced to suspend vaccine programme: WHO

UK Reports over 11,000 COVID-19 Cases in 24 hrs, First Time in four Months
The Most Polluted Cities On Earth (infographic)