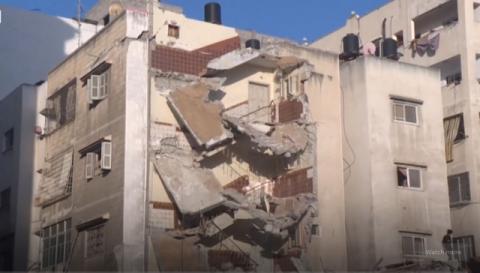 Palestinian officials in Gaza say Sunday was the deadliest day since the current fighting with Israel began.

More than 40 people were killed in the latest Israeli air strikes on Gaza, officials there say.

Israel's army say Palestinian militants have fired more than 3,000 rockets at Israel over the past week.

Israeli air strikes hit a busy street in Gaza just after midnight on Sunday, causing at least three buildings to collapse and dozens of deaths.

The Israeli military later said it had been conducted a strikes on a militant tunnel system in the area. The tunnels' collapse caused the houses above to collapse as well, leading to unintended civilian casualties, it said.

Hamas launched barrage of rockets towards southern Israel overnight and during the afternoon.

Millions of Israelis scrambled to safe rooms or shelters as sirens went off. Palestinians also tried to take precautions, but in the densely packed and poorly resourced Gaza Strip, many had nowhere to go.

On Sunday United Nations Secretary-General António Guterres has warned that further fighting could plunge the region into an "uncontainable crisis".

The UN has also warned of fuel shortages in Gaza which could lead to hospitals and other facilities losing power.

Ten people, including two children, have been killed in rocket attacks on Israel since the fighting began last Monday, Israel said.

The overall death toll in Gaza now stands at 188 people, including 55 children and 33 women, with 1,230 injured, according to the Hamas-controlled health ministry. Israel says dozens of militants are among the dead.