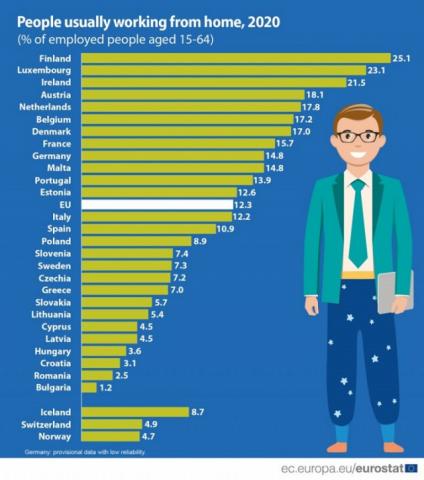 Bulgaria had the lowest percentage in the European Union of people working from home in 2020, at 1.2 per cent compared with an EU average of 12.3 per cent in the 15-64 age group, the bloc's statistics agency Eurostat said on May 17.

The social distancing measures that were introduced as a response to the Covd-19 pandemic forced many people to work from home, Eurostat said.

This resulted in a sharp increase, compared with an average of about five per cent over the past decade, the statistics agency said.

In previous years, the share of self-employed persons who reported that they usually work from home has been consistently higher than the share of employees in the same situation.

There are different trends according to the age and sex of workers when it comes to home working, Eurostat said.

Finland topped the list of the EU member states for home working, with 25.1 per cent of employed people usually working from home in 2020.

In contrast, the lowest shares of home-workers were...

German message to Serbia: You will have to

The EU will Block Putin and Lavrov's Bank Accounts

Eurostat: Bulgaria with the Biggest Jump in Greenhouse Gas Emissions in the EU