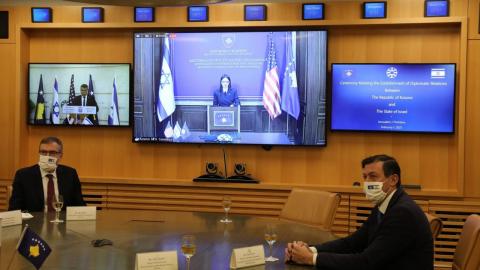 Kosovo's Foreign Ministry has sparked mixed reactions among experts and on social media with a statement strongly in support of Israel, following the latest escalation between Israel and Hamas militants in Gaza.

"Like every state, Israel has the right and obligation to defend its people against 2000+ rockets fired at civilians only by Hamas, which is holding Palestinian civilians hostage in its war," the Foreign Ministry said on Twitter on Sunday.

"We mourn all the victims. We urge [all sides] to refrain, stop the violence & seek peaceful solutions," the statement continued.

While many citizens in mainly Muslim Kosovo compare Israel's treatment of Gaza and Palestine to Serbia's harsh rule over, and aggression to Kosovo in the 1990s, some say Palestine does not deserve their support, as the Palestinian Authority does not recognise Kosovo, while Israel does.

This division was also reflected in the reactions the ministry's statement drew on social media.

However, most foreign policy experts say the government has made the right choice.

Nehat Islami, a former correspondent from the Middle East for Rilindja, the former Albanian-language newspaper in the former Yugoslavia, called the government's statement a "principled stance" that reflects the obligations Kosovo has assumed under the so-called Washington deal, signed in September 2020, under former US President Donald Trump.

Islami said the ministry statement was more balanced than it looked. "The government blames Palestine more [for the violence] … but it demands a...