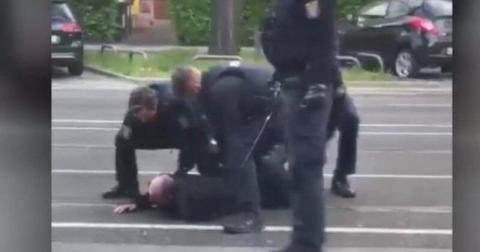 Turkey's ruling party spokesman on May 16  strongly condemned police violence against a Turkish citizen in Germany's Frankfurt, describing it as a "racist attack".

"This is a racist and fascist attack. It has nothing to do with public order," Ömer Çelik, spokesman for the AKP, said on Twitter, sharing the video of the police using violence against the Turkish citizen.

Earlier in the day, Selim Çiftçi, 35, suffering from a mental disorder, was subjected to police violence in the middle of the street in Frankfurt. He was treated at the hospital.

Speaking to Anadolu Agency, Hatice Götürmen, sister of Çiftçi said her brother's kidneys were severely damaged due to police brutality. She said her brother could have ended up remaining on dialysis if the urgent intervention had not been provided.

Turkey's Communications Director Fahrettin Altun had also taken to Twitter to condemn "the use of disproportionate force" by the German police.

"The footage from Germany must alarm anyone with a conscience and respect for human rights. It also proves that xenophobia is rapidly rising in Europe," Altun had said.

Yavuz Selim Kıran, Turkey's deputy foreign minister, also condemned the violence and said the incident would be closely followed by relevant authorities at all levels.