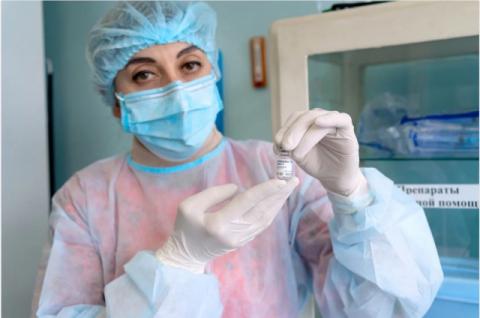 He said the EU was preventing the approval of the Russian vaccine Sputnik V in Europe for political reasons.

According to his statement unfriendly competition and corruption is sitting behind this, which results in suffering and death of people.

The European Medicines Agency (EMA) has been reviewing Sputnik V for weeks and is expected to reach a decision on its approval in the summer.

"The resistance of EU officials is a real brake on the expansion of the scale of vaccinations in European countries," Naryshkin said.

Russia has repeatedly accused the West of political intrigues against the vaccine, which has now been approved for use in nearly 70 countries.

However, Russian leaders also said early on in the pandemic that the country would not approve widely used Western vaccines made by companies such as Moderna and BioNTech, saying Russians should instead use vaccines developed in their own country instead.

"These scandals related to poisonings, cyberattacks and hacking, interference in elections attributed to Russia are so abstruse and sometimes even poor," he said, likening them to a "bad detective story."

He also said that the Russian officials are prepared for talks with British external intelligence agency MI6, and had written to agency chief Richard Moore and hoped to hear back...

Putin in Self-isolation after Covid Cases in His Inner Circle