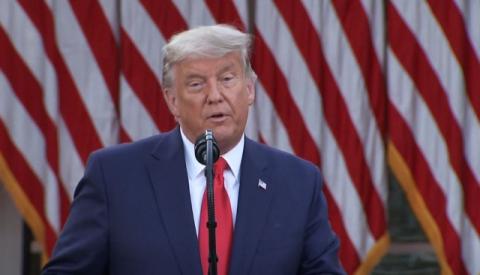 The New York attorney general's office says it is investigating the Trump Organization "in a criminal capacity".

A spokesman for the state's top prosecutor, Letitia James, said the inquiry into Mr Trump's property company was "no longer purely civil".

The Trumps deny any wrongdoing and say the inquiry by a Democratic prosecutor is a political vendetta.

"We are now actively investigating the Trump Organization in a criminal capacity, along with the Manhattan DA. We have no additional comment." is said in a statement.

The statement did not say what turned the inquiry from civil to criminal in nature, or whether the former president himself might be personally implicated in any allegations.

Throughout his time in office, Donald Trump dismissed any probe into his financial dealings or those of his organisation as a politically-motivated "witch hunt" led by Democrats desperate to see him forced from power.

The New York State Attorney General, clearly believes that there is enough at play to warrant moving the investigation from a civil to a criminal one.

When combined with the ongoing examination of the former president's tax returns by the Manhattan District Attorney, Mr Trump is looking at a complex and tangled legal battle ahead — one which he remains adamant he shouldn't have to face but which he now almost certainly cannot avoid./bbc