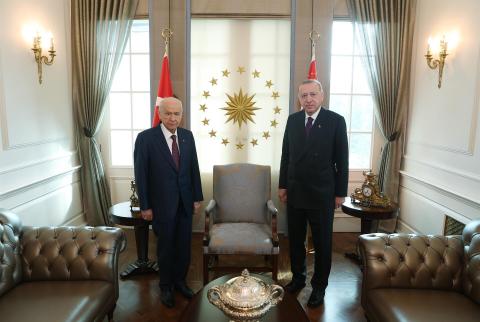 The meeting came following the introduction of a 100-article constitutional draft by the MHP on May 4.

In February, Erdoğan urged all political parties to participate in drafting a new constitution, with Bahçeli voicing the agreement.

Regarding the new constitutional proposal, Bahçeli said the general principles of the state listed in the first five articles of the current constitution were preserved with their exact form and qualities in Article 1 of MHP's proposal.

The MHP leader did not publicize the draft and informed that his party would first share it with his partner at the People's Alliance, Erdoğan and his ruling Justice and Development Party (AKP).

The opposition Nation Alliance comprising the Republican People's Party (CHP), the İYİ (Good) Party, the Felicity Party and the Democrat Party has vowed that if elected, its priority would be to replace the current model executive-presidential system with what it calls a strengthened parliamentary system.