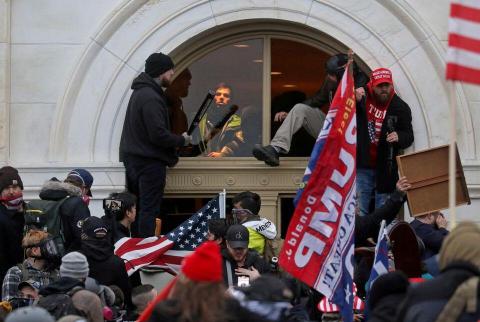 Thirty-five House Republicans joined Democrats in voting to create a bipartisan commission to investigate the Jan. 6 attack on the Capitol, risking the wrath of former President Donald Trump and flouting GOP leaders who condemned the proposal as unfairly partisan and unneeded.

The Republican mavericks were led Wednesday by New York Rep. John Katko, who wrote the measure with Homeland Security Committee Chairman Bennie Thompson, D-Miss. Katko, that panel's top Republican, was battling two tides that have overwhelmed Congress in recent years: the nearly overwhelming potency Trump still has among Republicans and a jagged-edged partisanship that often confounds even mundane legislation.

"I encourage all members, Republicans and Democrats alike, to put down their swords for once, just for once, and support this bill," Katko said before the House approved the measure.

The 35 defectors represented a relatively modest but significant slice of House Republicans, of whom 175 opposed the legislation. Their defiance underscored the party's rift as some lawmakers supported an investigation of the shocking and violent Capitol attack while leaders tried to avoid enraging the former president, whose support they believe they'll need to win House control in the 2022 elections.

The 10 who backed impeachment included Katko and Rep. Liz Cheney, R-Wyo., Trump's most prominent House GOP critic. She did not speak during Wednesday's debate, but after the vote she tweeted a message urging the Senate to approve the commission, saying, "Some things must be...