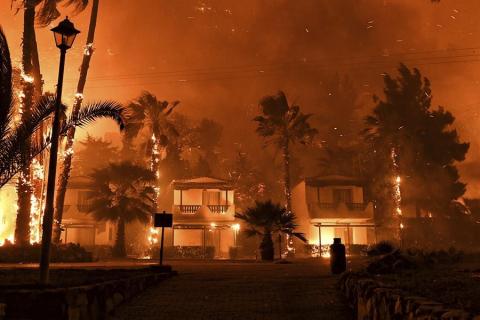 Firefighters intensified water drops using planes and helicopters before nightfall on May 20 after a wildfire west of Athens forced hundreds to flee their homes and sent a huge cloud of smoke and ash over the capital, obscuring the view of the Acropolis.

The fire gutted and damaged dozens of houses as it tore through rugged terrain, burning more than 2,000 hectares (5,000 hectares) of forest, authorities said. Smoke from the fire was visible across southern Greece and even on holiday islands in the Aegean Sea.

Fire department officials said 17 water-dropping planes and three helicopters were involved to try to contain the blaze that started about 70 kilometers (45 miles) west of Athens outside the resort town of Loutraki.
But the drops would have to stop overnight.

"It's going to be another difficult night and the conditions will remain difficult. But we're using all the resources we have on this," Civil Protection chief Nikos Hardalias said.
On Thursday, authorities issued evacuation orders for 18 settlements, in areas with many vacation homes. Two Orthodox Christian monasteries and one convent were also evacuated.

The fire destroyed power lines, causing widespread blackouts, and reached a nearby coastline and damaged several fishing boats. The Civil Protection Authority activated a cellphone-enabled alert service to help the evacuation effort.
Fire department spokesman Lt. Col. Vassilis Vathrakoyiannis said more than 250 firefighters were deployed, with their effort focused on stopping the blaze reaching the town of Megara, where more than 30,000 people live.
"The situation ... remains dangerous with fires rekindling at many locations," Vathrakoyiannis said.

He said a lull in high winds had helped...