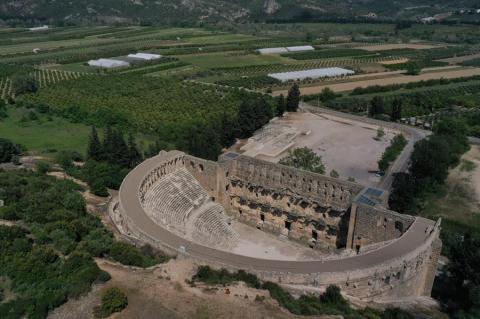 The ancient city of Aspendos, which attracts attention with its architectural structure in the southern province of Antalya, offers history and nature together.

Home to one of the rare ancient theaters and aqueducts that have survived to this day in the Serik district, Aspendos also draws attention with its architectural feature.

The ancient city, which is one of the most visited ancient sites in Antalya by local and foreign tourists with the measures taken within the scope of the COVID-19 pandemic, defies years with its glory.

A part of the movie "Five Eyes," which brings together the famous Hollywood director Guy Ritchie and actor Jason Statham, was shot in the ancient city of Aspendos in the beginning of the year, too.

Social media posts by Ritchie and Statham about their admiration for Aspendos aroused more interest in the ancient city. Despite the pandemic, visitors of the ancient city take selfies in the areas where the film was shot.

The 2,000-year-old two-storey shops and stoa (columnar gallery) complex, unearthed during the excavations in Aspendos, which stands out with the ancient theater and one-kilometer-long aqueducts built as a whole with the rows of seats and the stage building, reveal the commercial and political importance of the city.

Speaking to the state-run Anadolu Agency, the head of Aspendos excavations, Professor Veli Köse, said that the ancient ruins in Aspendos represent structurally unique examples of the harmony of engineering, monumentality and decoration.

Köse, a faculty member of Ankara University's department of classical archeology stated that the most remarkable structures that distinguish Aspendos from the others are the theater and aqueducts.