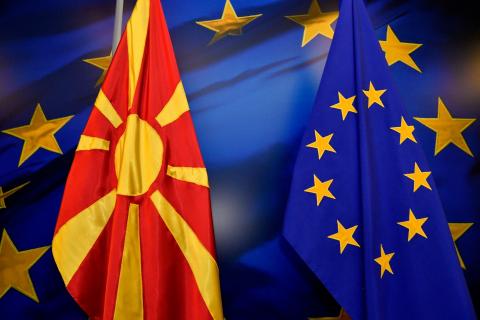 Skopje – Foreign minister of Slovenia, Austria and the Czech Republic, Anže Logar, Alexander Schallenberg and Jakub Kulhanek, expressed support to North Macedonia’s EU path at a working visit to the country on Saturday. Macedonian FM Bujar Osmani thanked for their support and called for EU accession talks to start as soon as possible.

“We will do everything to help North Macedonia on its EU path,” the Foreign Ministry quoted Logar as saying on Twitter.

Logar assessed North Macedonia’s progress as very good and pointed out that the country had met all the conditions for the start of accession talks long ago. He regretted the fact that the enlargement process had come to a standstill and stressed that the process was crucial for progress and changes in the region, the Foreign Ministry said.

He expressed hope that the negotiating framework will be confirmed soon and the first intergovernmental conference between the EU and North Macedonia scheduled. He welcomed the efforts by the Portuguese EU presidency to call intergovernmental conferences with North Macedonia and Albania in June, which the Austrian and Czech ministers also expressed support to.

Logar said at a joint press conference with Kulhanek, Schallenberg and Osmani that the EU’s enlargement to the Western Balkans would be a priority of Slovenia’s presidency to the EU Council in the second half of the year.

Slovenia will host an informal EU-Western Balkan summit in October, Logar noted, adding that the goal was to host a regular summit in the future as well. “This is not just about the Western Balkans, but the entire Europe,” the minister said, according to the Austrian press agency APA.

Schallenberg said he had high hopes of Slovenia’s EU presidency and promised Slovenia support in this respect, the Macedonian press agency Mia reported. He also expressed support to the efforts for enlargement by the current Portuguese presidency.

“This joint trip is a very strong message of our full support to North Macedonia’s efforts on its path to the EU,” he said.

According to him, the accession talks with the country should have started long ago. Skopje deserves this, he said, adding that starting the talks as soon as possible should be a priority.

As for Bulgaria’s blockade of North Macedonia’s talks, the Austrian minister said that all member states had an opportunity to speak up at critical points during the negotiations. He said emptions and rhetoric should be put aside. “We need an agreement, we want an agreement,” he said.

According to the Mia agency, Logar welcomed the fact that Macedonian and Bulgarian presidents, Stevo Pendarovski and Rumen Radev, will travel to Rome together next week to honour the work of Saints Cyril and Methodius, which he thinks is an excellent opportunity to discuss this issue.

Macedonian Minister Osmani thanked his counterparts for support. “Austria, the Czech Republic and Slovenia are committed to cooperation to facilitate the EU enlargement process and to see North Macedonia pass and conclude its accession talks,” he tweeted, adding that any delay would cause enormous damage.

“The start of accession talks with North Macedonia in the summer will be an important opportunity to confirm that the future of the entire region is in the EU. The success of North Macedonia would be a success of Europe as a whole,” he said.

The trio is expected to travel on to Tirana today, where they are scheduled to meet Albanian counterpart Olta Xhacko, as well as Albanian President Ilir Meta and Prime Minister Edi Rama on Sunday.

Florin Raducioiu : It is painful that Romania has missed EURO 2020

How to Prepare for Vacation in Bulgaria?

Vaccination of children could start soon