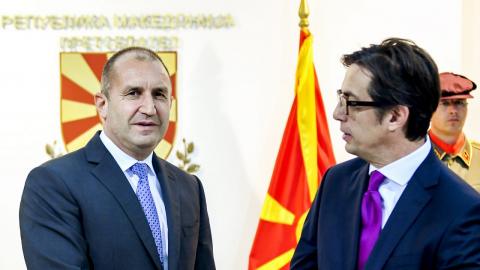 North Macedonia's President Stevo Pendarovski and his Bulgarian counterpart, Rumen Radev, are traveling this week to Rome to pay joint tribute to Sts Cyril and Methodius, the ninth-century missionaries and founders of the first Slavic alphabet, who were sanctified there in the 19th century.

Although the two neighbouring countries, like the rest of the Slavic world, celebrated their holiday on Monday, the two presidents will fly to Rome a bit later, on Wednesday, due to the COVID-19 safety protocols in place in the Vatican.

On Thursday, the heads of the two mainly Orthodox countries will lay wreaths in the Santa Maria Maggiore Basilica where, in the 9th century, Pope Adrian II blessed the books and alphabet devised by the two brother missionaries and saints. According to the protocol, Radev and Pendarovski will have separate meetings with Pope Francis in the Vatican.

The display of religious harmony comes against a backdrop of political tensions between Skopje and Sofia. Late last year, Bulgaria blocked the start of North Macedonia's EU accession talks, disputing North Macedonia's history, language and identity, which it insists has Bulgarian roots.

Skopje insists that it cannot compromise over sensitive issues such as national identity.

Pendarovski last week said that during their joint visit he does not expect formal talks with his Bulgarian counterpart on these issues. But he said the dispute will surely form part of informal parlays.

"This is a positive, symbolic gesture by the two sides, and will help ease the atmosphere a bit ahead of what's to come in the forthcoming talks related to the blockade," Pendarovski said.

Despite that, expectations of a quick breakthrough, before June, when the EU has pencilled in...