Embassy statement: The situation is becoming tense; 110.000 troops at the borderline 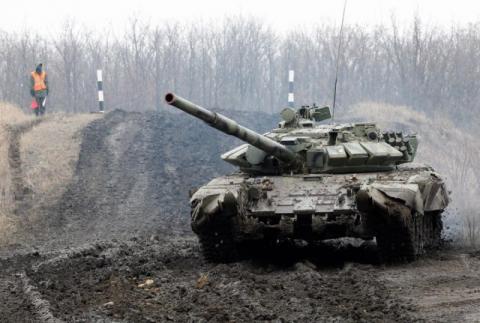 The statement reads that the total number of Russian troops stationed on the borders of Ukraine and Crimea includes up to 110.000 soldiers, up to 1.300 tanks, 3.700 armored vehicles, up to 1.300 artillery systems, including up to 380 missile systems.
"In addition, the Russian occupying army in Donbas consists of over 35.000 soldiers, including more than 2.800 regular members of the Russian Armed Forces.
Russian forces in Donbas, the so-called First and Second Army Corps, are fully integrated into the military management system of the Russian Federation. The group of these forces is subordinated to the headquarters of the Southern Military District of the Russian Federation, with its headquarters in Rostov-on-Don", the Ukrainian embassy states.
Despite orders from Russian Defense Minister Sergey Shoygu to withdraw troops, most weapons and military equipment systems are still stationed near the Ukrainian border, the statement said, adding that "according to available information, only 3.500-4.000 soldiers have been withdrawn from the temporarily occupied territory of Crimea", while all other forces (including along the Ukrainian-Russian state border in the east), their equipment and weapons remained in their previous positions".
In that way, there are about 40.000 Russian soldiers in Crimea at the moment (compared to 32.500 in early March), the statement concludes.
Ukraine believes that Russia continues to undermine negotiations and threatens the fragile situation on the ground, reminding that Russia has already issued more than 538.000 passports to Ukrainians in the temporarily occupied territories of Donetsk and Luhansk regions, while "occupying forces" continue to violate ceasefire.
"Russia is grossly and systematically...

At a Bilateral Meeting, Blinken and Lavrov Exchanged Threats and Hopes