May 24 – Day of Slavonic Letters and Literature 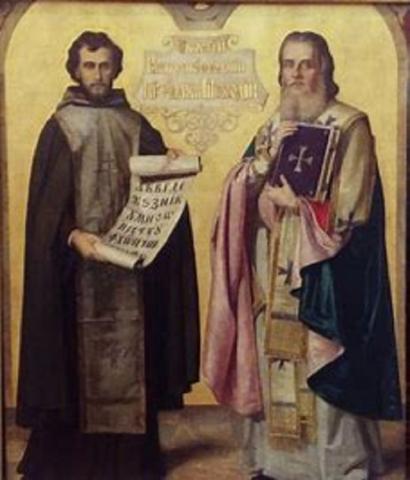 As you may probably know, Bulgaria is the only country in the European Union that uses the Cyrillic alphabet. Our entry into the EU in 2007 made Cyrillic the third official alphabet in the EU after the Latin and Greek ones. On May 24th we celebrate the Slavonic Literature and Culture. We also honor the creators of the Cyrillic alphabet - the brothers St. Cyril and St. Methodius and their students.

What is the story of the Cyrillic alphabet?

In the 9th century there was something like a competition between the Pope in Rome and the Emperor of Constantinople. A competition for influence over the still not Christianized (and mainly Slavonic) peoples in Europe. The Byzantine Emperor and his Patriarch thought it would be a good idea to provide an alphabet to the Slavs. The idea was to eradicate the Western influence. Cyril and Methodius were chosen to go to Great Moravia; parts of today's Czech Republic, Slovakia and Hungary. Their mission  was to create a Slavonic alphabet. The first Slavonic alphabet was the so called Glagolitsa (from "glagol" = word) or Glagolitic alphabet, which was also the first alphabet to be used for Slavonic manuscripts.

At the same time, the Bulgarian Knyaz Boris decided that he could actually make use of that alphabet. He had just adopted Christianity from the Patriarch in the Byzantine Empire. The problem in Bulgarian churches was that liturgy services were all conducted in Greek. Because of this the common people couldn't understand anything. Therefore, Boris asked two of the students of Cyril and Methodius - Kliment and Naum - to introduce the new alphabet to some Bulgarian priests and to teach them to preach in Slavic language. However, Kliment soon realized that letters in the Glagolitsa did not correspond...