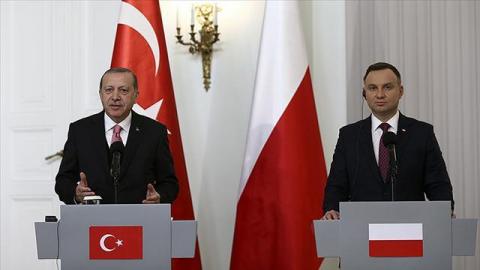 Duda arrived in Ankara on May 23 and will meet with Erdoğan's on May 24. Trade Minister Mehmet Muş welcomed the Polish president upon his arrival.

The leaders will review all aspects of bilateral relations and exchange views on the current regional and international developments, the statement said, adding bilateral agreements will also be signed.

Poland announced on May 22 that it will buy 24 armed drones from Turkey, becoming the first NATO member to buy Turkish-made unmanned aerial vehicles (UAVs).

The Bayraktar TB2 drones, the first of which are due to be delivered next year, will be armed with anti-tank projectiles. Poland will also buy a logistics and training package, said Defense Minister Mariusz Blaszczak.

Blaszczak told state radio the Bayraktar TB2 drones "have proven themselves in wars" and added that the UAVs would be serviced by a military company, without giving further details.

The contract, which will be concluded without a procurement process, will be signed during Duda's visit.