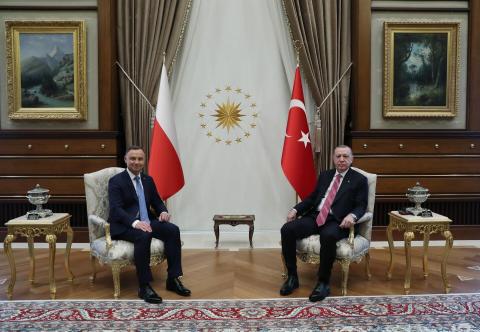 President Recep Tayyip Erdoğan met with his Polish counterpart, Andrzej Duda, on May 24 as part of the latter's two-day official visit to the capital Ankara.

The leaders would review all aspects of bilateral relations and exchange views on the current regional and international developments, the statement said, adding that bilateral agreements will also be signed, a statement by Turkey's Presidency said ahead of the talks.

An agreement on the sale of Turkey's Bayraktar TB2 drones was expected to be signed during Duda's visit to Turkey after the Daily News went to press. This would be the first time a NATO member acquires Turkish drones.

The Bayraktar TB2 drones, the first of which are due to be delivered next year, will be armed with anti-tank projectiles. Poland will also buy a logistics and training package, said Defense Minister Mariusz Blaszczak.

Blaszczak told state radio the Bayraktar TB2 drones "have proven themselves in wars" and added that the UAVs would be serviced by a military company.

Bayraktar TB2 entered the inventory of the Turkish army in 2014 and is currently used by several other countries, including Ukraine, Qatar, and Azerbaijan. Erdoğan said in March that Saudi Arabia was also interested in buying Turkish drones.

Turkey has effectively used its cutting-edge drones over the years in cross-border, anti-terror military operations, such as Euphrates Shield, Olive Branch, and Spring Shield, to liberate its Syrian border from terrorist entities.

Export licenses were suspended in 2019 during Turkish military activities in Syria. Restrictions were then...