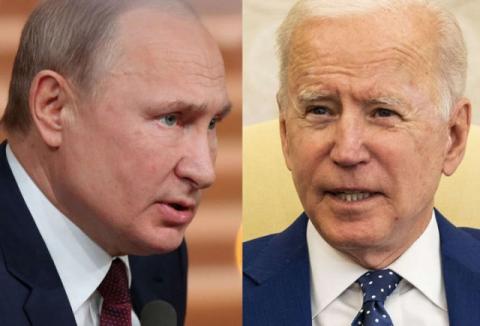 President Joe Biden will meet Russian President Vladimir Putin in Geneva on June 16, the first summit between the two leaders since the American president took office.

"The leaders will discuss the full range of pressing issues, as we seek to restore predictability and stability to the U.S.-Russia relationship," White House Press Secretary Jen Psaki said in a statement Tuesday.

A statement from the Kremlin said that the two leaders will "discuss the current status and prospects of Russian-American relations, issues of strategic stability, as well as issues on the international agenda, including cooperation to fight the coronavirus pandemic and resolve regional conflicts."

The meeting will follow Biden's participation in G-7 and NATO summits in the U.K. and Brussels.

Relations between the U.S. and Russia are poor due to Putin's aggression toward neighboring countries and his treatment of political opponents, as well as American financial sanctions against his government and associates.

Both leaders have signaled an interest in negotiating a new nuclear arms reduction pact, however.

Earlier Tuesday, Russian Foreign Minister Sergei Lavrov hailed what he called Biden administration officials' "respectful" tone in talks finalizing the meeting over the last week. "This allows us to hope that through starting a serious, concrete dialog on practical, not invented issues and common threat and risks, we can count on clearing away some irritants (if both sides make an effort). It won't be fast and it won't be easy."

The summit is a diplomatic win for Putin as it reflects an acknowledgment by Biden that he has to deal with him, said Fyodor Lukyanov, head of the Council on Foreign and Defense Policy, which advises the Kremlin.<...