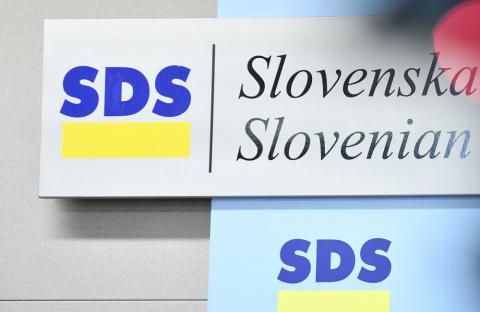 Ljubljana – The ruling Democrats (SDS) have defended a draft resolution they plan to adopt at the upcoming congress and which warns about the possibility of civil war and leftist extremism, as the opposition stepped up criticism of a document they claim constitutes scaremongering.

“If anyone thinks advocacy of constitutionality and respect for the Slovenian constitution is controversial, there’s something wrong with them,” Branko Grims, a senior lawmaker for the SDS, told the press on Tuesday.

The SDS wants to preserve the constitutional order, democracy and security in Slovenia, and that is the only clear message of the resolution, he said.

The statement comes after several media leaked a resolution the party plans to adopt at its congress in June and which warns of the dangers of the opposition Left, extremists, leftists and the escalation of tensions.

It says that Slovenia has been experiencing street violence perpetrated by extremists who are backed by leftist political forces and often have ties with foreign movements, describing the SDS a party that promotes democracy, the rule of law and high standards to protect human rights.

Grims alleged the Left plans “to drive businessmen into the sea with bayonets”, noting that “those who agree with that and tolerate that are driving Slovenia into civil war”.

He was referring to a manifesto widely circulated by government supporters on social media that was attributed to the Left but which the Left said was completely fabricated and had nothing to do with the party.

“The Left should prove what is true and what is not true,” he said, adding that a Left MP had posted that manifesto on his Facebook page.

Asked whether such resolutions will not end up worsening political tensions, Grims said the political arena was being “heated up by leftists who have gone crazy on the streets of Ljubljana”.

The resolution was already condemned yesterday and the opposition parties stepped up their criticism today.

“The deeper he is in [trouble], the more radical his moves, his latest being scaremongering with civil war,” Left leader Luka Mesec said about the SDS leader, Prime Minister Janez Janša.

He sees the resolution as a sign he and the party are afraid of the Left and were trying to demonise it.

“Unfortunately, we’re in a country where the prime minister and his party depict a topsy-turvy world, where those of us who are on the front lines defending democracy are becoming perpetrators in the eyes of these people – the people who are actually demolishing institutions.”

LMŠ leader Marjan Šarec said the SDS messed up everything and was now resorting to ideology, noting that such manifestos are primarily designed to consolidate the party.

“Talking about the possibility of civil war is utterly abhorrent. We know the situation is not the way they are trying to depict it. The fact is that 75% of the people did not vote for the SDS and the nation is far from split. The majority of the nation disagrees with the current state,” he said.

Social Democrat (SD) president Tanja Fajon described the resolution as “absurd, dangerous and worrisome, because it does not warn against civil war, it is menacing”.

“Janša is indicating a very dangerous course for the country’s future … he’s putting himself above the Constitution,” according to Fajon.

SAB leader Alenka Bratušek said her party could not believe that the SDS “can really be so crazy”. The party is convinced this is a diversionary tactic to divert attention from the “disastrous state of public finances, public health and foreign policy”.