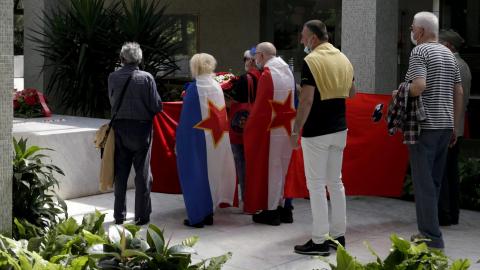 People gathered in the Serbian capital Belgrade and the Croatian village of Kumrovec to mark the Socialist-era 'Youth Day', when showpiece events used to be held all across the former Yugoslavia and its leader Josip Broz Tito's birthday was also celebrated.

The Museum of Yugoslavia in Belgrade allowed free entrance on Tuesday and organised a special programme dedicated to Youth Day, including a DJ playing Yugoslav-era music, a workshop for children and the opening of a new exhibition at the House of Flowers, where Tito is buried.

The exhibition seeks to offer "better understanding of the complexity of Socialist Yugoslavia and the role of Josip Broz Tito in it, as well as the legacy that it has left for us", the museum said on its website.

Youth Day was marked in Tito's home village of Kumrovec on Saturday with the laying of wreaths in front of his monument at an event attended by representatives of the local authorities, the Josip Broz Tito association and the Croatian Alliance of Anti-Fascist Fighters and Anti-Fascists, SABA.

"Tito had a special relationship with young people who carried the burden of the people's liberation struggle [against fascism in World War II], but also the burden of rebuilding the destroyed country after the war," said SABA's president, Franjo Habulin.

Some media reported that although the gathering was not pre-announced, around 1,000 people visited Kumrovec during the day.

In the Yugoslav era, Youth Day was marked with a massive relay race that wound across the entire country, through Slovenia, Croatia, Bosnia and Herzegovina, Montenegro, Macedonia and Serbia.

The annual Relay of Youth ended in Belgrade on May 25 with a spectacular ceremony at the Yugoslav Army Soccer Stadium, at which...