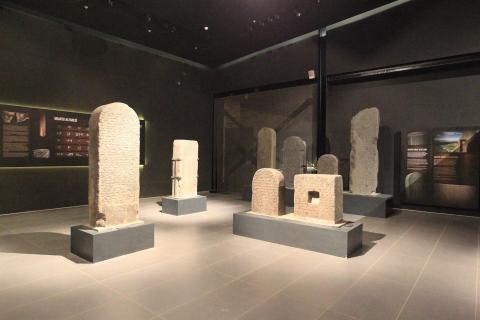 The Van Museum, built within the scope of the "centers of attraction support program," carried out by the Industry and Technology Ministry in the eastern province of Van, attracts the attention of visitors with 45,000 artifacts dating back to many civilizations as well as the Urartians and animation sections related to historical periods.

The museum, which was built in the north of Van Castle after the former museum building was damaged by the earthquakes that took place on Oct. 23 and Nov. 9, 2011, in the city and opened two years ago, is home to important artifacts from the past of the provinces of the eastern region. Now after a period of shutdown due to the COVID-19 outbreak, the museum is ready to welcome visitors.

In the museum, which was built in the İpekyolu district on an area of 50,000 square meters, 13,000 square meters of which is the closed area, visitors feel the spirit of the ancient periods with the animation sections on the life styles and wars of civilizations.

Speaking to the state-run Anadolu Agency, Van Museum Director Erol Uslu said that the museum is the largest museum in the world in terms of its Urartu artifacts.