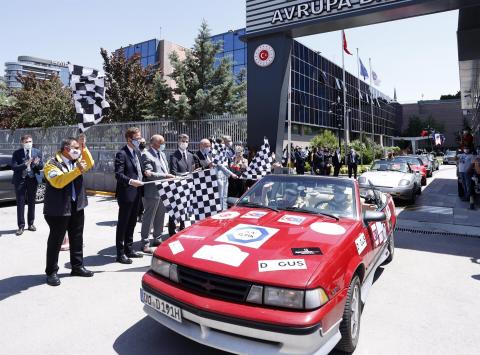 The Turkey stage of the 15th Europa-Orient and East-West Friendship and Peace Rally, one of the world's leading automobile rallies, has set out for Turkey's Cappadocia from the capital city of Ankara.

Foreign Affairs Deputy Minister Faruk Kaymakcı bid farewell to the cars taking part in the rally from the Directorate for EU Affairs building in Ankara.

"Due to this occasion, the contestants will have the chance to get to know Turkish people and the tradition of Turkey," he noted during the farewell ceremony.

He wished all the participants in the rally a journey enriched with Turkish hospitality in all the provinces to be visited along the route.

The course of the rally, which includes the world-famous Cappadocia, will end at the Aegean province of Muğla on May 29.

The rally kicked off in Belgium's capital Brussels on May 16, and the participants, traveling by way of the Balkan international locations, arrived in Turkey recently.

The rally has been supported for 11 years as a part of Europe Day celebrations in Turkey within the scope of Turkey's EU Communication Strategy.