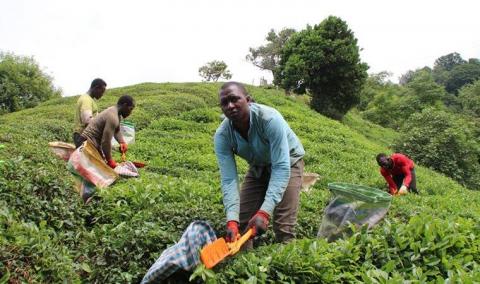 Workers from African countries filled the void to pick tea in the Black Sea province of Rize after nationals of Georgia and Azerbaijan could not come to Turkey as the borders were closed in line with measures to prevent the spread of COVID-19.

Some 40,000 foreign workers, especially from the Caucasian countries, were expected to arrive in Rize as the tea harvest season began. But they were barred from entering Turkey as border gates were closed within the scope of coronavirus measures.

Instead of them, African workers from Gambia, Senegal, Sudan and Zambia, who have a residence permit in Turkey, came to the Black Sea province, as they did last year, to pick tea leaves with daily wages ranging from 200-250 Turkish Liras ($24-29).

The most popular employees of the vast tea gardens in Rize are three Senegalese workers.

Abdulhamit Baa, a 23-year-old Senegalese national who actually moved to Turkey to become a professional footballer, is one of the migrant workers who has been visiting Rize for three consecutive years to pick tea.

"Unfortunately, I could not find a football club. I came here when I learned through my friends that there is a need of a tea worker," Baa said, adding that he had no idea how to pick tea when he first arrived but gradually learned it.

Osman Sisi, another 40-year-old Senegalian citizen, has been in Turkey for seven years, but he started picking tea in Rize during the last two seasons.

"My friends will come too, and we will continue to collect tea with them this season," he noted.

Turkish tea pickers working with these migrant workers often praise them, saying that they are hardworking people.

While speaking to Demirören News Agency,...

Global call for ‘free COVID-19 vaccine for all’