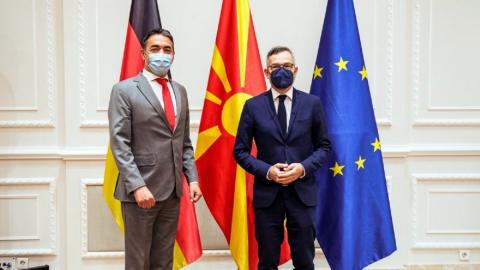 Germany's Minister for Europe, Michael Roth, said on a visit to Skopje that there is a chance of a breakthrough between Bulgaria and North Macedonia that would allow the start of North Macedonia's much-delayed EU accession talks on June 22 in the EU Council.

"I am grateful to our friends here … [in North Macedonia] and in Bulgaria because now we have a big chance to put forward a solution that could be accepted by all sides as soon as June," he said.

The Portuguese [EU] presidency is working actively on such a solution, and we … in Berlin are supporting it however we can," Roth added.

Asked what had prompted this sudden optimism, Roth said: "Now, we all see clearly that we need credible successes in the Western Balkans, not because it is in your [North Macedonia's] interest, but because it is also in our own interest to have stability, regional reconciliation, safety and democracy. That is of utmost importance for the EU".

Roth's host, Dimitrov, said he was also a cautious optimist on a possible breakthrough but did not want to blow expectations out of proportion.

Although both sides have said they are ready to continue talks, the Skopje government insists that it cannot compromise over sensitive issues such as national identity.

Earlier this week, the EU Enlargement Commissioner, Oliver Varhelyi, and the Portuguese Foreign Minister, Augusto Silva, whose country holds the EU presidency, went on a brief...