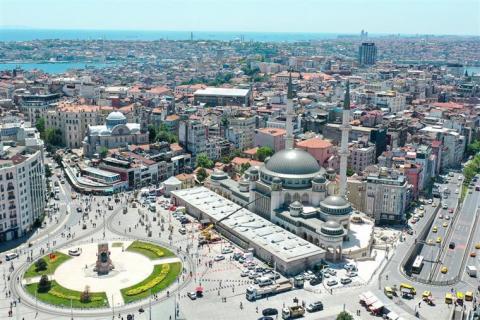 President Recep Tayyip Erdoğan inaugurated a new mosque in Istanbul's Taksim Square on May 28, saying this has been a decades-old goal.

"Taksim Mosque was brought in our Istanbul after a 1.5-century-long struggle," he said, addressing the crowds gathered for the ceremony after the Friday prayers.

" I see Taksim Mosque as a salute to Hagia Sophia Mosque, which we opened to worship a while ago, as a gift to the 568th anniversary of the conquest of Istanbul," he said.

The idea of building a mosque in the square dates back to the years of the Ottoman-Russian War, known as the '93 War, he said, noting that it was also on the agenda again during the years of the Turkish War of Independence.

He stated that citizens had difficulty performing their prayers in the district for decades because the construction of a mosque was not allowed here despite attempts by previous governments.

"You should not doubt that the voice echoing in front of the Taksim Mosque disturbs the imperialists, terrorist supporters and enemies of humanity who have accounts on our country," Erdoğan said.

With two towering minarets, the mosque complex will be able to host as many as 4,000 worshippers and has an exhibition hall, a library, car park and soup kitchen.

Construction of the mosque began in February 2017 in a project championed by Erdoğan, but it was beset for decades by court battles and public debate.

Officials on May 28 shared on Twitter a video showing Erdoğan in 1994, the year he became Istanbul mayor, pointing from the top of a building towards the area where he said he would build the mosque, the exact spot where it now stands.