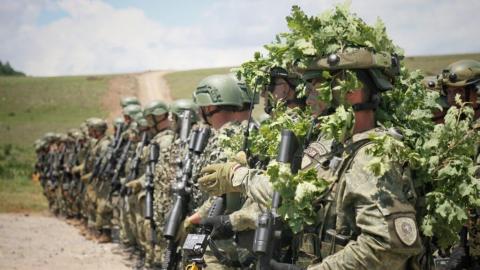 Around 330 members of the Kosovo Security Force took part in the US-led "Defender Europe 21" military exercise on Friday near the western town of Gjakove/Dakovica.

Kosovo Security Force Colonel Ejup Maqedonci specified that for the first time Kosovo was one a host country of such an exercise, one of 16 among a total of 27 participant countries.

"Defender Europe 21 is an exercise of broad scale which is directed by the US Army for Europe and Africa and is aimed at increasing operational readiness and interoperability between the US, allies and partners in this exercise," Maqedonci recalled.

Observing the exercise, Kosovo President Vjosa Osmani praised the KSF's role in the operation and added that through such joint exercises "Kosovo is sealing its fate with its international allies".

"Our army is grown and developed on this vision for a modern army and you are materialising it every day with your professionalism," Osmani told KSF members.

Prime Minister Albin Kurti said that through the exercise, the KSF would gain new capabilities, and promised to increase its budget.

"This exercise is special because our strategic ally, United States, has for the first time trusted our country and the KSF to host this exercise," Kurti said.

The massive US-led exercise including 28,000 force members from 27 states, including the United States, NATO countries and their allies, started this week. It will conduct exercises in more than 30 training areas in 12 countries during April, May and June, including Western Balkan countries.

The annual US-led exercise is designed to build readiness and interoperability between US and NATO and partner militaries.

The Defender Europe 21 drill started off weeks ago in the port of...