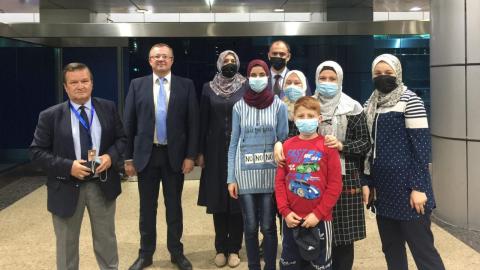 With help from Egypt and Ukraine, Moldovan authorities evacuated 13 Moldovan citizens, including children, from the Gaza Strip, who arrived back on Thursday following the recent military conflict between Hamas and Israeli forces, which destroyed much of the Gaza Strip.

"We feel exhausted but at the same time, we are glad that we can reach our homeland to see our relatives," said Aliona Hamdia, a mother with children evacuated from the Gaza Strip in a short video.

She also called on the authorities to help other women in the same situation who "do not have documents and cannot leave the country in these difficult times".

The authorities do not know exactly how many Moldovans live in Gaza. Mostly are reportedly women married to local Palestinians. An unofficial estimate says says a couple of hundred Moldovans live there.

A crisis cell within the Moldovan Foreign Ministry linked with the Moldovan embassies in Tel Aviv, Ankara, Kyiv and the consulate in Odesa managed the repatriation operation for the Moldovan citizens.

They were brought by bus through the Rafah border crossing point with Egypt. En route to Cairo, transport security was ensured by the Egyptian authorities.

Together with 130 Ukrainians and four Bulgarian citizens, the 13 Moldovans embarked on a charter from Cairo to Kyiv supplied by the Ukrainian government.

From Kyiv, Moldova sent a special bus to pick them up, also offering medical help and food. The Moldovans arrived in Chisinau on Thursday night, entering via the Palanca border point on the border with Ukraine.

The Moldovan government allocated 150,000 lei [about 7,000 euros] from the Intervention Fund for the operation.

Initially, the Foreign Ministry drew up a list of 31 people who...