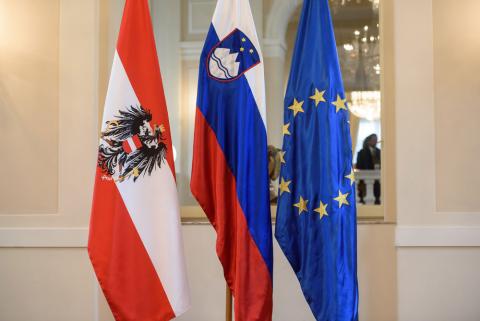 Ljubljana/Vienna – Infrastructure Minister Jernej Vrtovec met his Austrian counterpart Leonore Gewessler in Vienna on Thursday to discuss bilateral cooperation, especially in transport and infrastructure, and bilateral relations. They agreed cooperation should be strengthened in infrastructure.

“I’m glad that there are no major open issues in our cooperation in road cargo and passenger transport,” Vrtovec was quoted as saying by the Infrastructure Ministry.

The construction of a second tube in the Karavanke motorway tunnel is the best long-term solution for both neighbouring countries and for transit transport, the minister said, adding that the work on the second tube was proceeding on schedule.

The pair also touched on the Slovenian-Austrian railway connection through the Baltic-Adriatic TEN-T corridor with Vrtovec saying that the countries were thus excellently connected.

He added efforts were under way to improve the railway infrastructure on the corridor. He highlighted the modernisation of the Ljubljana-Maribor railway track, full implementation of the European Train Control system and modernisation of key railway hubs, including Ljubljana and Pragersko.

Vrtovec and Gewessler also exchanged views on cooperation between the countries in terms of connectivity of the port of Koper with the Austrian market, touching on the Koper-Divača rail project and the upgrading of the Karavanke railway tunnel.

“Luka Koper is the most important entry-exit point for overseas imports and exports of Austrian goods. The construction of the second railway track in the Koper-Divača section will significantly increase the capability of this railway connection. The goal of the project is to eliminate the bottleneck on this railway section and thus guarantee long-term increased capability of the railway infrastructure in Slovenia,” Vrtovec said.

He also presented to his Austrian counterpart the priorities of Slovenia’s upcoming EU presidency in the second half of the year in transport. “The success of the decarbonisation policy largely depends on transport, which has been the most affected by the Covid-19 epidemic, so we must do everything in our power to secure the sector’s recovery,” Vrtovec said.