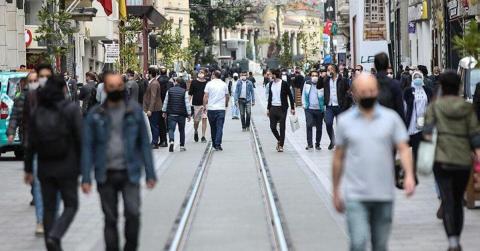 People in Turkey suffered psychological disorders, including depression and fear of death, due to the COVID-19 pandemic and the consequent lockdowns, a survey revealed on May 28.

Mapping the psychological cost of the pandemic in the country, Turkey's Istanbul University conducted a research that showed the pandemic significantly contributed to the deterioration of "life satisfaction" among Turkish people.

The study was performed first in April 2020, when the effects of the pandemic started to be felt in Turkey, and repeated one year later in April 2021.

The research also showed that more people suffered from symptoms of depression compared to those a year earlier. While in April 2020, 31% of the respondents reported loss of control over their life, this segment soared to 44% in April 2021.

Over 51% of the survey participants reported sleeping disorders, while 41% faced a hard time in managing their daily duties.

Furthermore, 65% of the participants reported symptoms of fatigue, whereas 51% said their feeling of loneliness increased as of April 2021.

Participants of the survey, especially women, also reported a significant deterioration in intra-family relations and communication.

On the positive side, the Turkish family system turned out to be a shelter in tough times, with 65% of the respondents saying family members supported each other financially.

Speaking to Anadolu Agency about the research findings,...