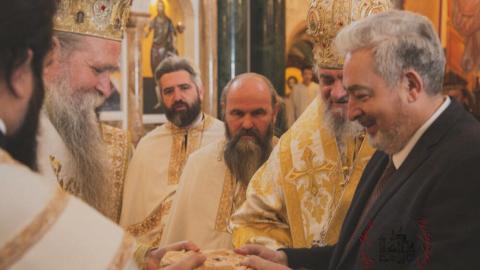 "This government and its prime minister didn't fulfill promises given to the Serbian Orthodox Church or our expectations, and they don't have our trust. We have to talk within the ruling majority," Mandic told media.

The government and the Serbian Orthodox Church failed to sign an agreement on May 28 about the church's position and rights in Montenegro, because Krivokapic called for it to be postponed to October 30, the anniversary of the day when the church's top bishop in Montenegro, Metropolitan Amfilohije, died from COVID-19 complications.

But on May 29, bishop Joanikije, who has since been elected as Amfilohije's replacement, called on the government to sign the agreement as soon as possible, saying that postponing to October is absurd.

"It's a kind of political manoeuvre and cannot be classified as a well-intentioned gesture that would lead to longstanding tensions being eased," Joanikije told news website IN4S.

The Holy Assembly of the Serbian Orthodox Church on Sunday elected bishop Joanikije of Budimlja-Niksic as the new head of the church in Montenegro after the death from COVID-19 of Amfilohije Radovic.

Metropolitan Joanikije, 65, will lead the largest religious community in Montenegro. He is a respected church figure and was a close ally of Amfilohije, notably during last year's protests against controversial legislation that the church claimed would lead to the confiscation of its property.

The same day, the Serbian Orthodox Church's Holy Assembly alleged that it was being treated differently to other religious bodies.