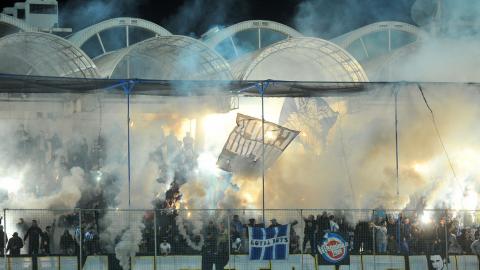 Genci Nimanbegu, an ethnic Albanian MP, urged the authorities to punish Buducnost Podgorica in a bid to halt the increase of hate speech in public.

"The title should be taken away from Buducnost, even though they deservedly won on the ground, as a lesson for the future that such a thing must not be repeated," said Nimanbegu.

During the match between Buducnost Podgorica and Decic, the Podgorica's club fans, who are known as the Barbarians, chanted a derogatory term for Albanians.

Decic football club is based in town of Tuzi and is a stronghold of Montenegro's ethnic Albanian minority.

Media reported on Sunday that some of the crowd at the stadium protested about the nationalistic chants, but the referee didn't interrupt the match.

There was condemnation from ruling coalition MP Stahinja Bulajic, a member of the pro-Serbian Democratic Front, and from Montenegrin President Milo Djukanovic.

"Multi-ethnic Montenegro is under attack. We will not allow rhetoric from the 1990s in Montenegro anymore," Djukanovic wrote on Twitter.

The mayor of Tuzi, Nik Djeloshaj, called on the Montenegrin Football Association and Buducnost Podgorica's management to condemn the nationalist chanting.

"Our players were civilised despite the chants and showed how to resist fascism. At our club, there are Albanian players but also Montenegrins, Serbs and Bosniaks," Djeloshaj said on Monday.

Buducnost Podgorica won the cup final match 3-1 and became the first team in Montenegro's history to win the double, after also securing the league championship.

Montenegro is a multi-ethnic state and is highly unusual in having no...