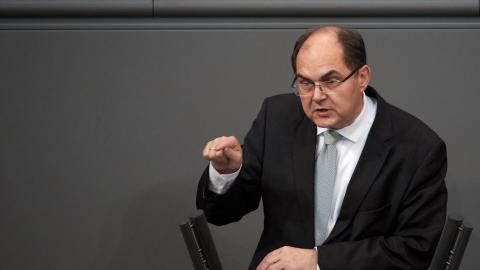 Berlin has given no indication that Schmidt's appointment signifies any meaningful increase in its commitments to Bosnia; a fact which is readily apparent given that Chancellor Angela Merkel is herself preparing to step down later this year.

Schmidt has demonstrated little in the way of substantive familiarity with Bosnia's contemporary political challenges in the half a year since his name became public and, above all, he has provided no indication as to how he will force Bosnia's entrenched nationalist rulers to comply with the Dayton Peace Agreement - especially the Serb nationalist regime headed by Milorad Dodik, whose government in the Republika Srpska entity, RS, has already explicitly rejected the legitimacy of Schmidt's appointment.

(L-R) Christian Schmidt of the Christian Social Union (CSU) and German Minister of Justice and Consumer Protection Heiko Maas of the Social Democratic Party (SPD) during the beginning of a cabinet meeting at the Chancellery in Berlin. Photo: EPA-EFE/HAYOUNG JEON

But the most troubling question on the horizon is not about Schmidt himself, but Russia. After months of reports that Berlin had made a series of overtures to the Kremlin to ensure a smooth arrival for Schmidt, Moscow's envoy in Sarajevo was scathing in his rejection of the PIC's decision. Like the Kremlin's premier local proxy Dodik, Ambassador Igor Kalabuhov made clear that Russia was preparing an immediate challenge to Schmidt's administration.

The most obvious counterattack the Russians can offer will be to challenge the mandate of the EUFOR observation force in Bosnia, Operation Althea, and possibly as soon as November.

The EUFOR mission in Bosnia has a dual executive mandate: one provided by the UN Security Council, UNSC,...